Please note: The content of this post is my own, unless the technical terms is too hard to explain, then the content is copy and pasted. I am not a medical professional and thus the post is my point of view. But the content is science-based and credible. Just because it is a new science, does not necessarily make it quackery.

CBS: The direct path to the liver 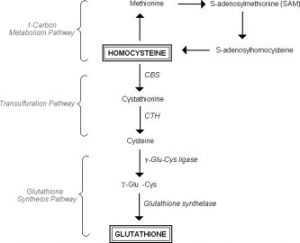 In order for the conversion from Homocysteine to Cystathionine to run smoothly you will need the Vitamin B6. If your levels are low or too high your CBS process does not function properly.

Cysteine is a precursor to glutathione, while methionine is important for DNA methylation and the growth of new blood vessels.

Glutathione is required for many processes, including immune function, detoxification, and the function of other antioxidants. Glutathione is a peptide that is produced through biosynthesis of three non-essential amino acids: cysteine, glutamate, and glycine. The highest concentrations are found in the spleen, liver, pancreas, and cornea.

As a powerful antioxidant, glutathione prevents damage to cells by neutralizing free radicals and detoxifying heavy metals. Without the protective actions of glutathione, free radicals and toxins begin to accumulate in the body causing oxidative stress to cells resulting in overall congestion of the body and a sluggish detoxification system. Adrenal Fatigue Syndrome is often an indication of low glutathione.

If you have been lacking in glutathione for an extended period of time (months or even years), there is a chance that your body has accumulated high levels of mercury. And we all know mercury in the body is not good.

Issues with the CBS gene can cause homocystinuria, an inherited disorder that keeps the body from processing the essential amino acid methionine…